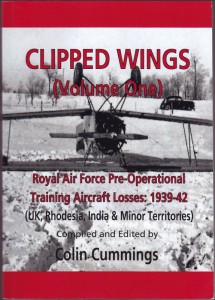 After compiling previous series of volumes or Post War RAF and Wartime Transport Losses Colin Cummings has turned his hand to cataloging RAF and Commonwealth training losses during WW2. As you can understand the number of these incidents will be considerable and so to make the task a lot easier and to allow a steady publication timetable he has decided to issue these in a series of 4 volumes.

Anyone familiar with Colin’s work will recognise the format and layout of the book which presents the information in landscape. This does make it a bit difficult to read as you have to hold the book in an uncomfortable way to read all the info (image holding a book 90 degrees to the right) but I can understand why he has chosen this as it provides more space to layout the data: Date, Serial, Aircraft, Unit, Place and Casualties in a Spreadsheet format. As usual Colin provides a brief description of the accident and a full casualty list if the incident was fatal. If no one was killed Colin has a again not listed them in order to prevent embarrassment to any individuals still alive. I can understand this policy to a certain extent but using the data provided it is possible to “Google” the answer in many of the cases so in my mind (and as even the youngest would now be in their early nineties) it seems a bit inconsequential now.

The RAFCommands website gets frequent mentions in the text and no doubt even those incidents which still have got queries against them may in the fullness of time be solved in the forum.

This book will no doubt become a mainstay of my research into RAF losses and I have already used it to find a hitherto unknown (to me) early 1940 parachute escape and I thoroughly recommend its addition to your library.

Future volumes will include considerable input from Bill Walker who is covering Canada and with it the large number of incidents within the British Commonwealth Air Training Plan.

Finally Colin reveals he is also writing a novel and plans a book on Post War Royal Navy losses.

and via the author who is a at

He can also be found as member Oldduffer on this website

As reviewed by Paul McMillan – February 2016