Words fail you when trying to describe this book. One cannot use the regular superlatives like ‘brilliant’, ‘memorable’ , ‘entertaining’ while write about a book that deals with the grim topic of recovery of human remains. Yet, this book is an un-put-down-able and poignant tribute to a service that tried relentlessly to bring closure to tens of thousands of families of the casualties in the Air War over Europe, Africa and the Far East.

Missing Believed Killed: Casualty Policy and the Missing Research and Enquiry Service 1939-1952 is a 200 odd page book written by Stuart Hadaway.  The book traces the effort by the RAF to trace its missing casualties, from its initial origins in the war to the post war raising of the MRES units.

Thanks to decades of books and the Internet offering easy access to research archives through common forums for exchange of information, it is easy to trace the loss of an aircraft, the details of its crew and their final resting places. More often than not in a cemetery maintained by the CWGC. 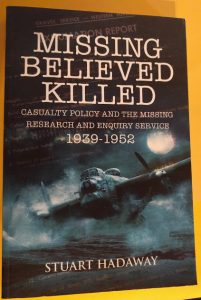 What is usually missing is the final journey that some of these casualties took from the spot they perished to their final resting place. Some of these journeys took years to complete – thanks in no small measure to the efforts of the MRES.  It is here the book excels – page after page is replete with stories on efforts to trace missing aircrew, with investigators on the ground scouring the liberated and occupied territories after the war, working with locals, and scant records. Coming up with ingenious ways to establish identities (like collaborating with laundry companies to identify laundry labels).

One cannot but get moved reading about the individual cases. And this is only the tip of the iceberg. The book probably covers only a hundred or so of the 40,000+ cases that were investigated.

The book covers the far east as well though not in as much detail as Europe – understandable as almost 90 percent of the casualties occurred in europe or in North africa.

Stuart Hadaway picked a topic that has previously been unaddressed – and going by the end product, he could not have picked up a more deserving topic or done more justice to this.