Seventy Years ago, Today, 3rd July 1945, De Havilland Mosquito KB416 , of No.627 Squadron crashed at RAF Woodhall Spa. The pilot Flt Lt D N Johnson was attempting to forceland after the misfiring of one of the engines.. A series of events caused it to stall and crash. Johnson perished.  But his navigator, Pilot Officer J  D Finlayson survived, thanks to a  remarkable attempt by one of the Crash Crew members on site, Corporal Stephen J Cogger, and a civilian who arrived at the site.  Finlayson was initially trapped trying to extricate himself and was ultimately helped by Cogger and others on the site.  During the rescue attempt, Cpl Cogger received burns on his face and body. 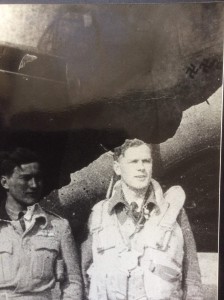 70 years later, Pilot Officer J D Finlayson’s son Andrew, shares the excerpts of the accident’s Court of Inquiry as provided by the Ministry of Defence here. 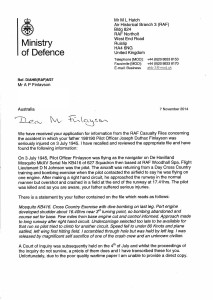 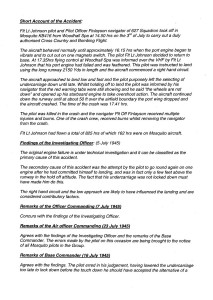 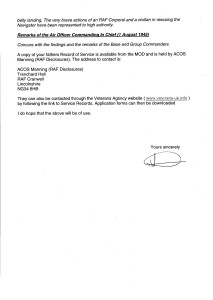 Corporal Stephen Cogger was awarded the George Medal for his bravery. 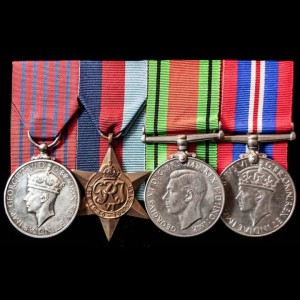 Stephen James Cogger came from Upper Holloway, London, and served during the Second World War as a Corporal (No.1585300) with the Royal Air Force Volunteer Reserve.

The citation for his George Medal reads as follows:

‘At 5.40 pm on the afternoon of 3rd July 1945 a Mosquito aircraft (No.KB416) of 627 Squadron, R.A.F., crashed in a field when on an overshoot after attempting to land at R.A.F. Station Woodhall Spa, Lincolnshire, on one engine. Corporal S.J. Cogger, R.A.F.V.R., who was in charge of the fire party, had already observed the aircraft to be in trouble so he ordered the fire tender to stand by, starting up the section Jeep himself. By this time the aircraft had crashed, so he drove to the scene immediately and, on arrival, found the aircraft on fire, the flames spreading rapidly along the leading edge of the wings and the fuselage.

Flying Officer Finlayson, the navigator, was lying in the wreckage by the leading edge of the wing, so Corporal Cogger entered the flames immediately and tried to pull him clear but found him to be held fast by some cables around his legs, one of which was badly fractured. He then went to the Jeep to get a hacksaw and a hand-held fire extinguisher, the duty orderly and ambulance driver and a civilian having arrived. All four entered the burining area, the civilian using the hacksaw to cut the cables holding the navigator’s legs whilst Corporal Cogger played the extinguished on him but, by this time, the flames had gained hold so the four men were forced to retreat. The fire tender had now arrived and was able to subdue the flames enough to permit the four rescuers to cut the navigator free. Corporal Cogger, in spite of burns sustained earlier, again entered the burning area to look for the pilot but he could not find him. The Corporal was ultimately taken to hospital suffering from major burns to the forehead, cheeks, arms and hands. He displayed great gallantry in circumstances when, at any moment, the aircraft might have exploded.’ Cogger’s George Medal award was published in the London Gazette for 26th February 1946. He is recorded as having attended some 14 crashes as N.C.O in charge of the fire party at Woodhall Spa airfield, ‘and in ten of these he has shown resource and determination in dealing with fires.’