Today is the 70th anniversary of the downing of 355 Sqn Liberator KH250, hit by AA fire during an attack on Port Blair, S. Andaman Island (the westernmost point of Japanese expansion, I believe) on 17 May 1945.

Of the eleven-man crew, only one was able to bale out: 1516012 F/Sgt Harold WYNNE. After three months of incarceration in Japanese hands in Port Blair, Wynne was executed by lethal injection on 17 August 1945 — after Hirohito’s surrender radio broadcast. Wynne and four of his crewmates, including their skipper, 177155 F/O Rowland TOTHAM, were on their first op in the Far East after completing a tour on Lancasters of 101 Sqn. Totham was awarded a DFC for his 101 Sqn tour.
Another crewman on the doomed KH250, Ted Rumsey-Williams, had completed a tour on Halifaxes of 578 Sqn; he was awarded a DFC after that tour.

The ten who died on 17 May 1945 fell just north of Port Blair. The Japanese forced local villagers to gather remains for burial in a single grave nearby. Post-war the British created a permanent grave marker complete with a names plaque — instead of exhuming the remains for reburial in a war cemetery. What makes this especially baffling is the fact that Harold Wynne’s remains, in a cemetery nearby, were moved to the newly-established Kirkee War Cemetery.

The families were never told the truth, and the ten men are officially missing, with no known graves.

I found the grave in late 2009, with the help of an associate in Port Blair. The struggle to get the grave exhumed continues. Currently the UK MoD’s Nautical and Air Advisor in New Delhi, Royal Navy Captain Stuart Borland, is working very diligently at winning the approval of the Indian government for a dig — which is the only holdup. I can’t praise Capt Borland enough for his stellar efforts.

The grave, once on high ground adjacent to a marsh, has been flooded routinely ever since the earthquake/tsunami on Boxing Day 2004 lowered the land by up to a meter and surged through the area. The concrete grave marker is a smashed wreck now, and missing the names plaque…very sad. The flooding is disgusting.

A crew photo can be seen here, along with a photo of the shattered crew grave which doesn’t show the flooding, and a photo of KH250: 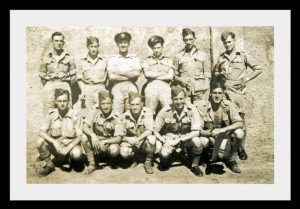 Back Row Left to Right:

Not pictured is 197862 P/O Robert James “Jim” DUCKWORTH, who, though tour-ex on 355 Sqn, volunteered to fly as screen pilot on the Totham crew’s first op in the Far East.

I am grateful to have been able to share substantial details with Bill Kennard about four years ago, including photos of the crew grave. And I have teamed up with Ron Manley, nephew of Bob McPherson, to find the kin of all the other crewmen. 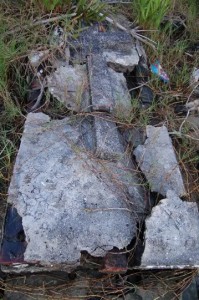 The Grave site in Port Blair

To win over the Indian government is the next hurdle…and then, if successful (nothing is a certainty), the exhumation will finally happen. What survives after 70 years? There’s only one way to find out.