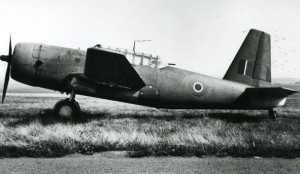 Almost exactly to the day, 72 years ago,  two Australians lost their lives taking off from Begumpet Airfield in Hyderabad, India.   The accident happened when Vengeance AN944, an aircraft newly built and inducted into service by No.82 Squadron RAF, was in the process of taking off from Begumpet for the flight to Madras.  At the controls were Flying Officer Edward Loughrey REIS with Sgt MARKLEW  as his gunner. 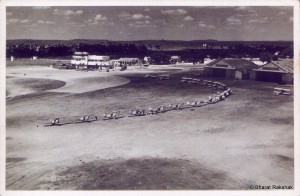 Reis was the fourth in the formation of Six Vengeances heading out to Madras.  As the Vengeance gathered speed on the runway it slowly drifted on to the grass side of the runway and got airborne.  Now with the drift, the aircraft flew slowly towards an elevated floodlight.  Those watching thought that Reis cleared the floodlight, but a puff of white powder emerged as the wing struck the obstruction. The Vengeance flipped over onto its back and crashed straight into the ground .  Edward “Ted” Reis was killed instantly. His gunner Marklew was pulled out grievously injured, and passed away a few minutes later.

Both crewmen were buried in the Trimulgherry Military cemetery the same day.  An RAF Regiment provided the escort and firing party. 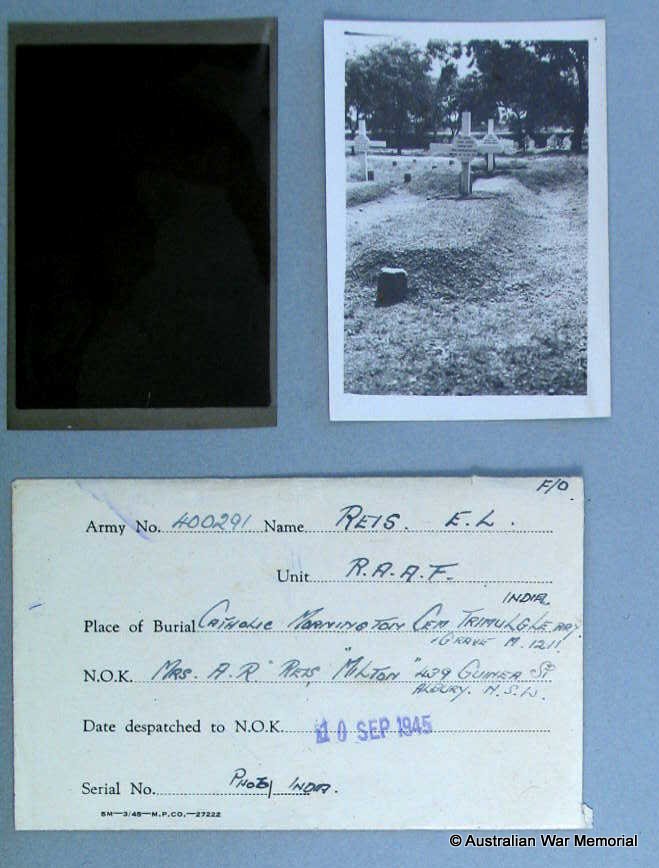 Original Grave Marker at the Trimulgherry Catholic Mornington Cemetery from 1945. 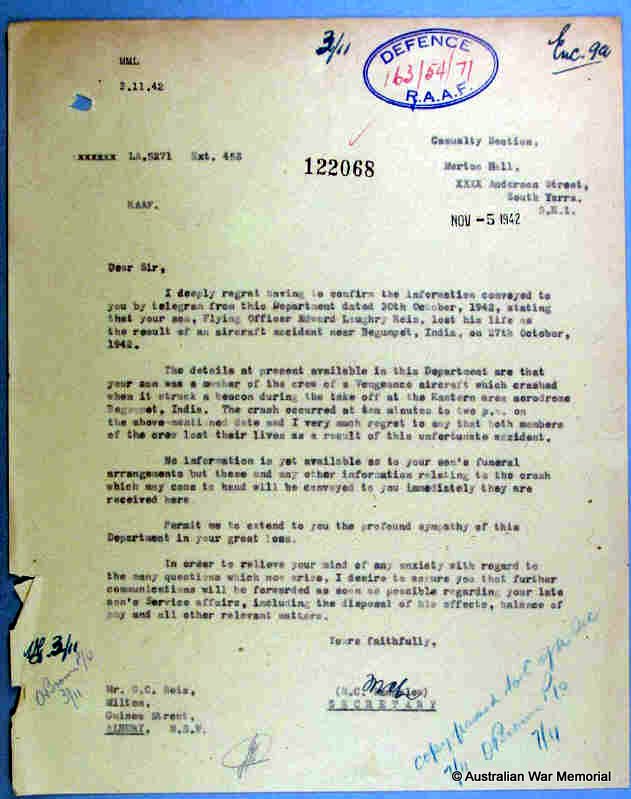 Though initially the casualties that occurred near Hyderabad and Secunderabad were usually interred in the cemeteries at Bolarum and Trimulgherry, the Commonwealth War Graves Commission, entrusted with the upkeep of the war dead of the British empire and its dominions, adopted a policy of ‘consolidation’ into a smaller number of more manageable cemeteries.

Nearly eleven years later, after the war, Reis remains were transferred from Trimulgherry to the CWGC Cemetary in Madras (Current Day Chennai) and laid to rest in Plot V Rod W, Grave 16. 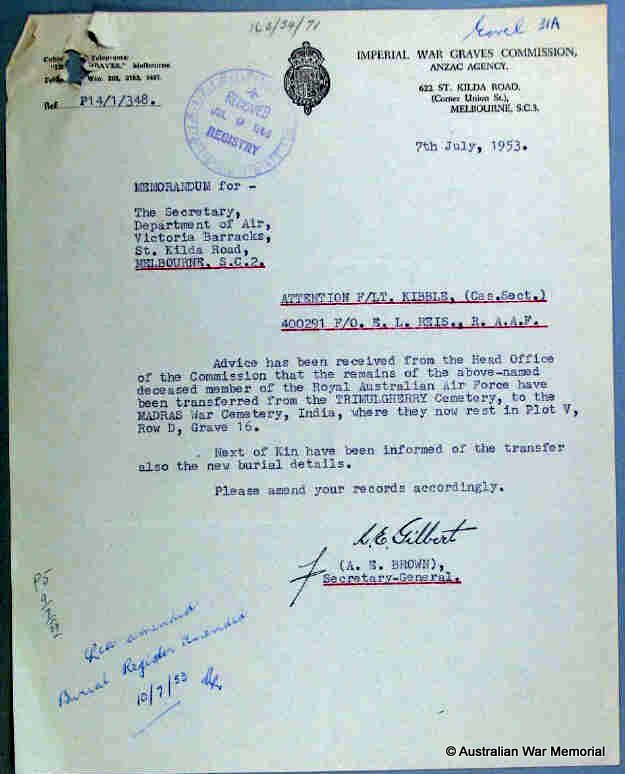 Letter notifying the transfer of the remains from Secunderabad to Chennai

Begumpet airport still exists today – home to the Indian Air Force’s Navigation Signals School. Much of the old infrastructure – terminal building, and hangars can be seen on the site.

There is little indication of the flurry of activity that happened here during the second world war, or of the aircraft that crashed, or the lives that were lost. 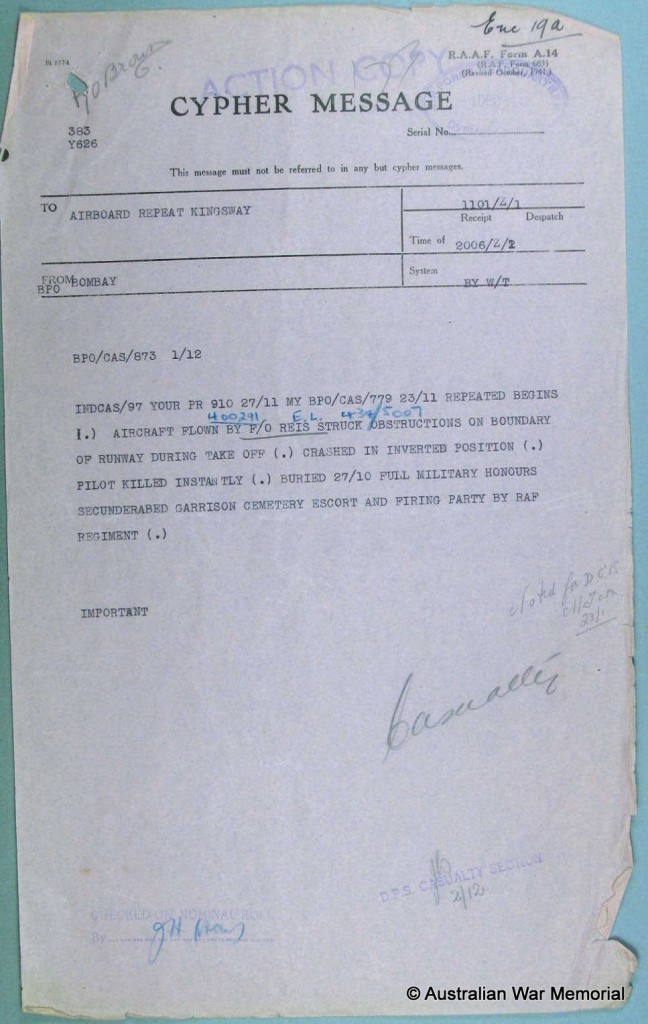 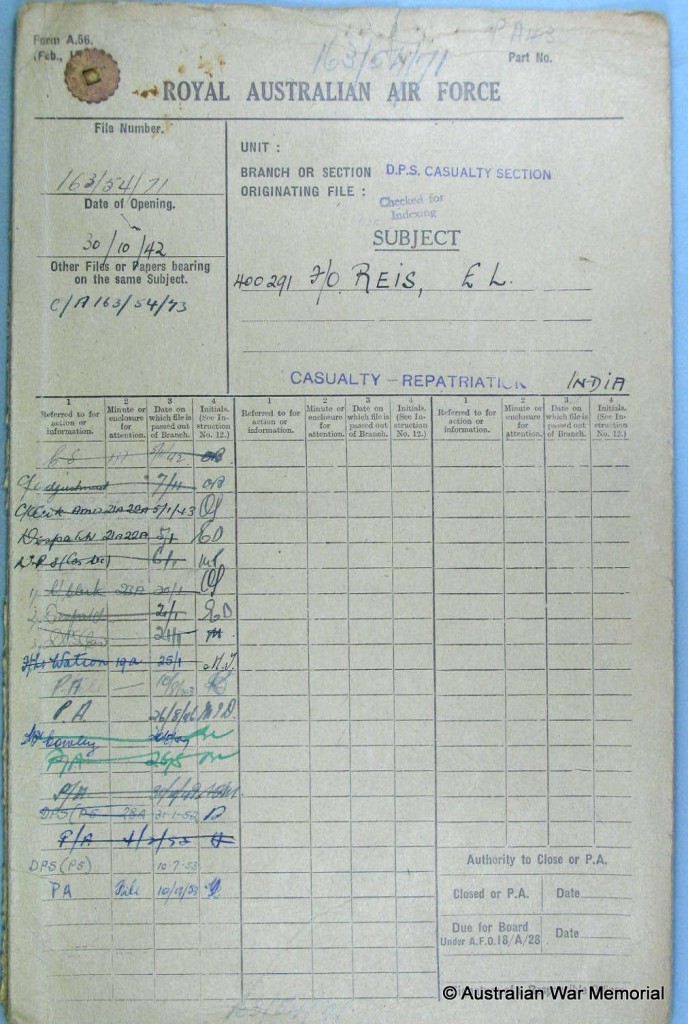 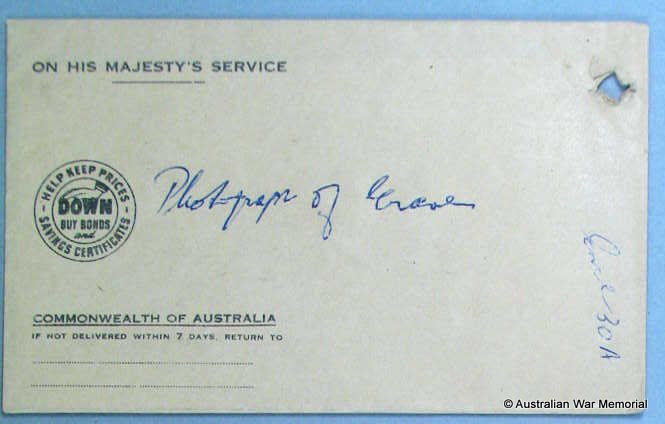 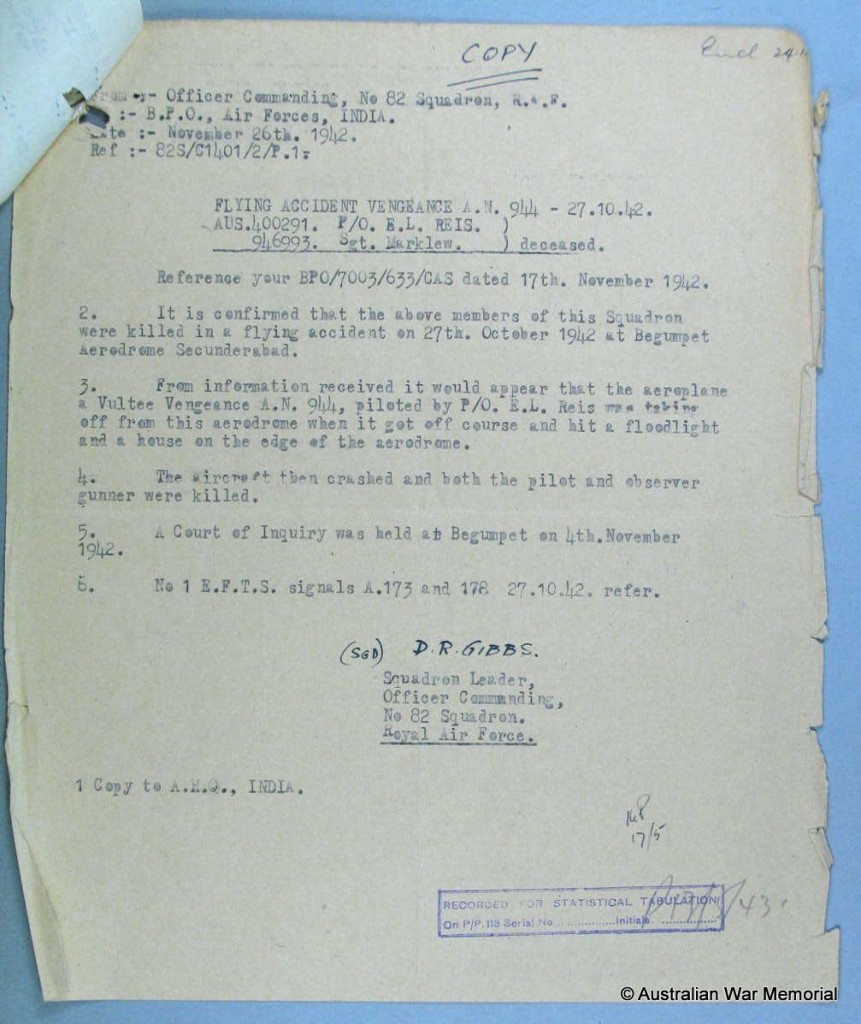 A short tribute to Reis from a local news paper.

He was a foundation member of the Albury Aero Club, and was the first member to make his solo flight.  At the outbreak of war he enlisted in the R.A.A.F., and completed his training in Australia. In March 1941, he was commissioned as Pilot-Officer, and in April this year, while serving under the Bomber Command in England he was promoted to Flying Officer.

Following upon this, he was transferred to India, and it was there, in the course of duty, he lost his life on October 27 in an aircraft accident. He was 24 years of age. A well-known Albury Catholic writes:

“Ted Reis was my ideal of a young Catholic gentleman. His bright personality and straight-forward nature endeared him to everyone who knew him, and all Albury mourns his untimely death. As a Catholic, his devotion to his faith was an example for all, young and old, to follow.”

On the day after Flying-Officer Reis’ death his only brother, Brian, entered camp at an R.A.A.F. station “somewhere in Australia.”