TO SUPPORT the large number of RAF and Indian Air Force squadrons flying the Hawker Hurricane in the campaign against the Japanese in Burma, a significant training organisation was established in India.Amongst the training and conversion units that flew the Hurricane were 151 Operational Training Unit at Peshawar and I Service Flying Training School (India) at Ambala.

Although by 1945 the latter unit was using around 100 North American Harvards, to give its new pilots some fighter experience before they proceeded to the OTU, the Ambala FTS was issued with around a dozen Hurricanes. However, it soon became apparent that many of the young tyros had difficulty learning to taxi the fighter in the approved manner, as it was equipped with pneumatic hand brakes in contrast to the hydraulic toe brakes that were fitted to the Harvard.

Flyable Hurricanes were in short supply on the FTS, so there was a natural reluctance to risk damage to them that would inevitably result from ham-fisted braking, thus an original solution was sought. One of the instructors, Fit Lt ‘Lofty’ Turner (Flt Lt W L Turner RAF 49525), came up with a novel and very practical solution. Together with one of his fellow instructors, Fit Lt Hamish Waugh (Flt Lt H A G Waugh RAF 117551) and Ambala’s Chief Technical Officer, Sqn Ldr L S Edwards (RAF 47959), he set about creating what became the Hawker ‘Dodo’ — nicknamed after the extinct flightless bird. (All the three officers were part of the Servicing Wing of RAF Ambala)

The main Hurricane variants shipped to India were Mk.lls and IVs and these were issued to the operational squadrons, but around 100 of the earlier Mk.ls, including at least two ‘L’ serialled examples, were sent for use in training. (three actually, L1825, L1848, L1935)

A Hurricane I that had been officially written off was ‘acquired’ by some devious means for conversion to the ‘Dodo’.

The newly acquired Hurricane was fitted with an old, and irreplaceable, Rotol wooden propeller ( Troy Smith: the prop shown is a standard De Havilland Hurricane unit, which has metal blades.) and thus some means to protect it in the event of sharp braking was essential. After some searching, Sqn Ldr Edwards obtained a pair of front forks from a Matchless motorcycle which were mated to a spare Hurricane tail wheel and some bespoke welded tubing to create a ‘nosewheel’ that was then attached to the engine mounting.

Initial tests showed this innovation to be quite effective, but another problem then manifested itself in that with the ambient temperatures at Ambala often reaching over 100 degrees, the prolonged ground running quickly resulted in engine overheating. However, the ingenious ‘Lofty’ Turner came up with a solution that was again swiftly engineered.

The existing, but now redundant, windscreen de-icing system comprised a tank filled with anti-freeze fluid and a small Ki-gas pump that was adapted to have two perforated tubes just in front of the coolant radiator through which water was pumped.Thus, when the engine coolant temperature was approaching its upper limit, a few strokes on the hand pump passed atomised water through the radiator and so improved its efficiency as a heat exchanger! This simple modification then allowed continuous ground running for up to four hours.

Other modifications for the ‘Dodo’ included the fitting of two external seats — one either side of the cockpit. One was for the instructor and the other for a second pupil. The seat on the instructor’s side was also fitted with an oxygen valve that was linked into the pneumatic system and could be turned off to simulate a brake failure.

Once the modifications were completed it fell to the Chief Instructor of I SFTS (l),Wg Cdr Baldwin (Wg Cdr P H Baldwin RAF 72019, who arrived at the SFTS towards end of November 1944), to try out the system. However, on his first test he inadvertently got airborne! Fortunately he landed the supposedly ‘grounded’ aircraft safely following which large vertical spoilers were fitted above each wing leading edge to prevent any youngster repeating the event — especially with his instructor sitting on the outside of the cockpit!

To ensure that everyone recognised what was then christened the ‘Dodo’, it was finished with broad black and white stripes and when active a rigid triangular streamer was fitted to the radio mast.The project was such a very successful adaptation, that with pupils also regularly ground looping Harvards, a grounded example of the US trainer was similarly modified.

The‘Dodo’ carried the number‘257’ on the fuselage. Unfortunately though, it has not proved possible to establish its full serial number to date.

Below: Raul Hubrisko’s hand built model of the “Dodo” 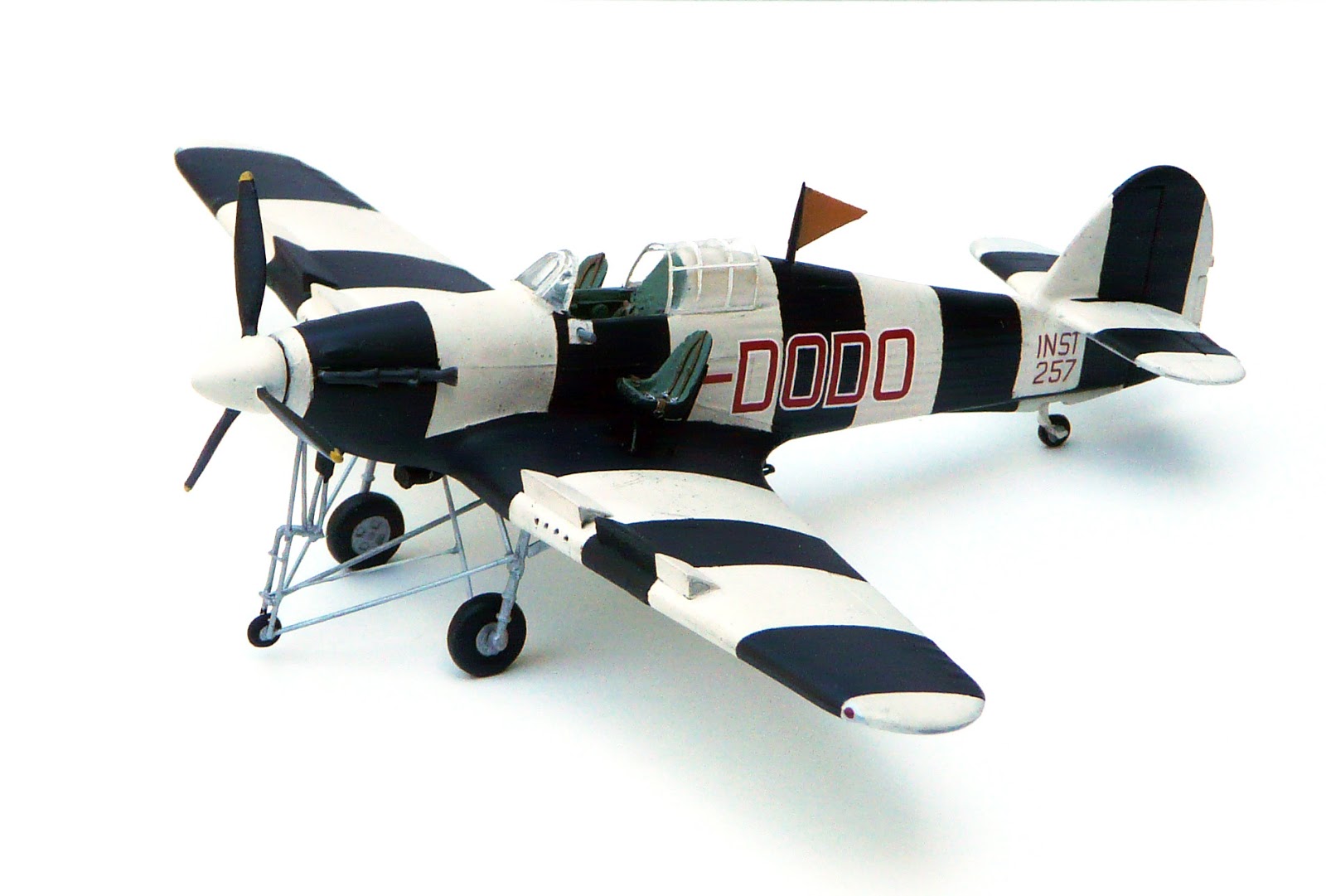 Another impression of the Dodo is by Omega Models inc who published a resin based model kit on the Dodo.