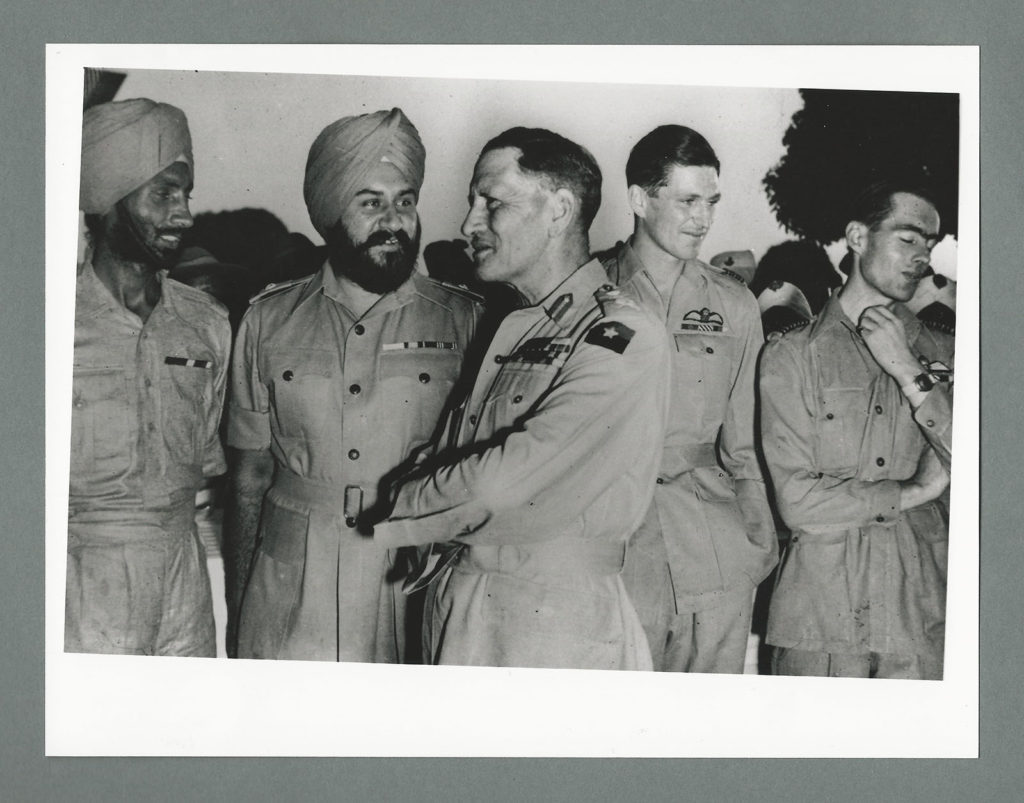 While trawling the net for some RAF related information – I stumbled on this photo at the International Bomber Command Center Site https://ibccdigitalarchive.lincoln.ac.uk/…/PCheshireGL1842.… – The caption says ” Leonard Cheshire stands on the right looking down to right. On his left another air force officer. Both are wearing tropical uniform tunic with pilots brevet. In the centre an army officer 😄 looks left talking to two Sikh officers with turbans. On the reverse ‘Leonard Cheshire (right), possibly a posting to India towards the end of his time in wartime RAF’.”

Leonard Cheshire VC (Right most) needs no introduction as the CO of the Dambusters squadron,  having taken command from Guy Gibson VC. He spent the last days of the war in India.

“An Army Officer” is of course General Claude Auchinleck, the Commander in Chief of the Indian ARmy.

At first I had no idea as to who the two Sikh Army Officers are.. but after some asking around – the identities are confirmed.

Left most is Jemadar Nand Singh of the Sikh Regiment, awarded the Victoria Cross. To his right is the Maharaja of Patiala, Colonel Harinder Singh.

The officer to the left of Cheshire is Wg Cdr J B Nicolson – another VC ..the only fighter command VC at that time – also in India around the same time.

As our fellow researcher Matt Poole would write:

The pilot to the left of Cheshire is James Brindley Nicolson (no “h”), who is also named Eric James Brindley Nicolson (and misspelled “Nicholson” at least once) on his Wikipedia page. However, his biography, by Peter D. Mason, and entitled ‘NICOLSON VC’, subtitled THE FULL AND AUTHORISED BIOGRAPHY OF JAMES BRINDLEY NICOLSON, explains the “Eric” name differently than on Wiki:

“James Brindley Eric Nicolson was born in Hampstead, London, on 29 April 1917…Although given the name Eric after an uncle killed in the war of 1914-18, he for some reason, known only to himself, omitted to use it.”

I know Nicolson had been CO of RAF 27 Sqn, flying Beaufighters over Burma and leading by example. I’d befriended and visited with a 27 Sqn navigator, ex-Rangoon Jail POW Jack Shortis, who said he did not like the man but acknowledged his greatness as a leader, also saying he would have followed Nicolson into the Valley of Death, if required. According to the Wiki source, Nicolson’s tenure on the squadron was from August 1943 to August 1944; the bio is unclear on this.

Nicolson was killed (body never recovered) on 2 May 1945 when RAF Liberator KH210 of 355 Sqn (based at Salbani, W. Bengal), in which he was flying as an observer, crashed into the Bay of Bengal. Thus, this photo was taken before that date.

Visiting 159 Sqn at Digri, W. Bengal, Leonard Cheshire went up on a test flight with 159 Sqn’s CO, W/Cdr James Blackburn, and some crew, in order to put a Liberator through a simulated dive bombing exercise. Quoting from an April 1992 letter Blackburn wrote to his former 159 Sqn navigator, Gordon Drain:

“The war in the Far East would soon be over and you may remember when my good friend G/Capt Len Cheshire VC passed through on his way to act as RAF observer on the first American plane to drop the atomic bomb.

He insisted that to attack a target and guarantee to destroy it with a couple of planes, was to dive and attack from a low altitude. To demonstrate this, we went up together to the practice range where he put the Lib – a plane he had never flown before – into a fairly steep dive and it took all our combined strengths to pull it out before it hit the ground.”

Blackburn was incorrect; Cheshire only observed the Nagasaki bombing, from afar, and not the first atom bomb drop on Hiroshima.

Cheshire’s visit to India predated the dropping of the atom bombs by many months; Blackburn’s recollection that it was when Cheshire was passing through on his way to act as an atom bomb observer implies that the date was in the summer of ‘45. However, the 159 Sqn Operations Record Book has the following notation:

I found another reference to Leonard Cheshire’s visit to Digri in a 29 May 2006 letter from 159 Sqn navigator Murray Duncan, who wrote that Cheshire’s visit occurred “sometime in October”. However, Duncan didn’t join 159 Sqn until December, so his story of Cheshire’s visit is second hand.

One of the men who was aboard for the Liberator dive bombing experiment, Don Willshire, told me about this harrowing flight, but he did not pinpoint the date or the Liberator serial number. I have a recollection that Don donated his logbook to the Imperial War Museum, but I can’t get into the website to check their archives at the moment. W/Cdr James Blackburn’s surviving logbooks (he lost some in the sinking of the Laconia) were donated to the 148 Sqn Association years ago, but I doubt this group exists any longer. What became of the logbooks? I’ll investigate. Sure would be nice to pinpoint when the Cheshire flight was.

Blackburn’s tenure as C.O. of 159 Sqn was only July-December 1944 – more evidence that he and Cheshire were photographed together (with Auchinleck and the Indians) in 1944.

STOP THE PRESSES! I just discovered the same photo that you posted,  in the Peter D. Mason biography of Nicolson. The caption reads: “At Viceregal party, 1944, with General Auchinleck, Group Captain Cheshire and other VC’s”. The photo’s source: Imperial War Museum.

But that’s not all. I also found another photo, posted below. Note the caption: “Nick with Group Captain Cheshire at Viceregal party in Calcutta, 1944”. Source: Imperial War Museum. 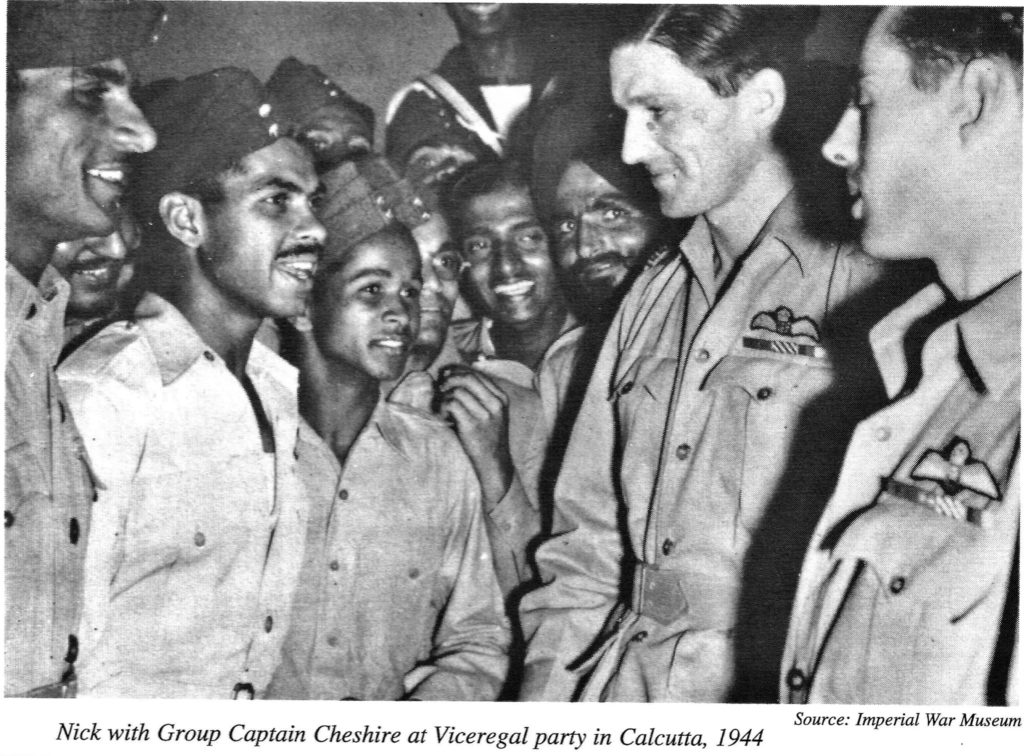 By chance today, I happened to browse again through the Peter D. Mason biography of James Nicolson. This time I read the Foreward, written by G/Capt Leonard Cheshire, and, aha, it gives a little more detail on when he and Nicolson spent time together. Quoting from the Foreward:

“My recollections of James Nicolson are restricted to the week or so we spent together at the Viceregal Lodge, Calcutta, in September 1944.

“Both of us, I suspect, were a little out of our element, I more than Nick, since I had only recently arrived from the European theatre, whereas he had been based in India and Burma for some time, as I recall it.”

So, then, those photos showing the two British VC winners with Jemadar Nand Singh, another VC recipient, and also with the Maharaja of Patiala, Colonel Harinder Singh, were likely taken in September 1944 at the Viceregal Lodge.

The problem is, where is this Viceregal Lodge? The captions to two photos in the Mason book did refer to the “viceregal party”, but in Calcutta. A magnificent Viceregal Lodge is in Simla, not Calcutta, and my friend, Mr. Google, tells me that there was one in Delhi, too. Was there one in Calcutta, or are the captions slightly in error?

Furthermore, previously I mentioned Don Willshire, who was airborne with James Nicolson and Leonard Cheshire on a hair-raising Liberator dive bombing practice flight from 159 Squadron at an unknown date. I told you that I thought Don had donated his logbook to the Imperial War Museum, and possibly he recorded the flight, and the Liberator’s serial number, in that logbook, but that I could not gain access to the IWM’s archive search function at the time.

That was still the case today, until I tried Internet Explorer, another search engine. Bingo! Here is the info listed for Don Willshire’s donated items:

“PRIVATE PAPERS OF FLIGHT LIEUTENANT L.D.J. WILLSHIRE RAFVR Content description Ts reminiscences (18pp) and a ts transcript of an interview (6pp), principally covering incidents during his service in the RAFVR in India and England, including a collision on take-off and a near crash during a practice bomb run (in an aircraft piloted by Group Captain Leonard Cheshire VC) in September and October 1944 while he was stationed with No 159 (Pathfinder) Squadron RAF at RAF Digri, India, as well as containing descriptions of how punishments for minor infringements of service regulations were evaded, together with a ts transcript of an interview (6pp) containing much useful information on his CO, Wing Commander J Blackburn, and also ts notes (7pp) on his sorties, his Flying Log Book (June 1943 – 1946) recording training as an air gunner in England and bombing raids in the Far East, his Airman’s Service and Pay Book, Service and Release Book, a photocopied history of Beaulieu Airfield and other related papers, four meal tickets issued to him at RAF Bridlington (1942), his medals, ribbons and a brevet, and medals and identity discs for his wife (née Gladys Marsh), who served in the WAAF, two photographs and two issues of ‘Flight Magazine’ (August 1944) and ‘airmail’ (July – September 1995) both of which contain a photograph of him with aircrew and his Liberator while stationed in the Far East.”

So, then, to find the date and serial number of Don’s Liberator flight with Nicolson and Cheshire, maybe it’s just a matter of getting someone to the IWM to peek at Don’s flight logbook, where hopefully he noted the Cheshire practice flight. And to check those two transcripts from the interviews, and, if necessary, to listen to appropriate parts of the interviews.

On the other hand, Don told me that by the latter part of 1944, he was only listing his ops in his logbook – in which case, unless he pinpointed the date in his interviews, very possibly the best we can come up with is the “September and October 1944” timeframe. At least I feel confident that the photos showing both Nicolson and Cheshire with others at the “viceroyal party” were taken in Sept/Oct 1944, long before Cheshire headed out to witness the second atomic blast.