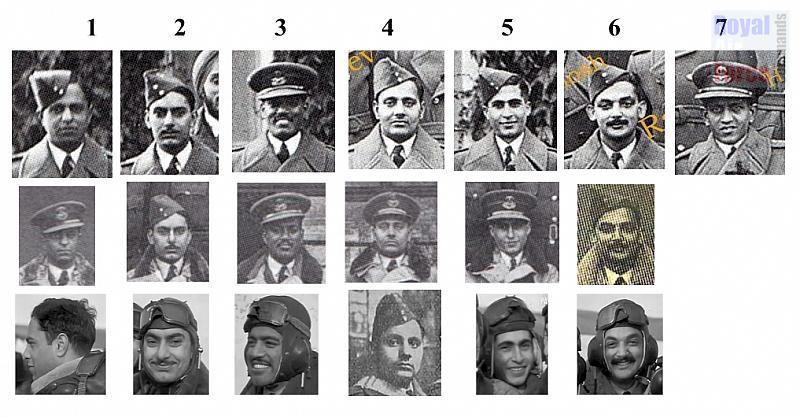 On 31st August 1941, Wellington W5577 of No.12 Squadron RAF failed to return from a raid on Bologne. Two of the crew members are known to be in the montage above, but trying to identify them exactly is turning out to be difficult.
There is plenty of information in this thread  about the loss of the Wellington. http://www.canadaatwar.ca/forums/showthread.php?t=3541

Target: Bombing at BOULOGNE
Takeoff: 2120 hrs
Bomb Load: Fourteen 250 lb GP. (GP = General Purpose)
Target Info: Target Boulougne. Bombs aimed at centre of target area (this info from the other aircraft in the mission that returned to base)

Now my question. I have been trying to identify photos of Khosla and Dastur. Infact I have a photo with six possibilities – but do not know who is who. Does anyone have a photo of Indian Aircrew from 12 Squadron dating from this time?

From my end I am sure Khosla and Dastur are atleast two of the faces numbered 1 to 6. But i dont know who is who.. There are three photos of each of the six .  Perhaps one day we will know who is who?