‘Wing Commander Leonard Harrison, G.C., who died on July 17 [1989] at the age of 83, was one of Britain’s outstanding bomb disposal experts, who probably defused more unexploded devices during the Second World War than any other man. Even after retiring from the R.A.F. in 1949 he continued his dangerous vocation, working in a civilian capacity for the Ministry of Defence until his final retirement in 1970.

He earned his George Cross not for a single exploit, but for a series of coolly executed bomb disposal operations in the early part of the war. In February 1940 he had rendered harmless an unexploded bomb which was wedged between decks in a grain carrying ship that had come into Immingham.

But on his own admission his most hazardous task was on Good Friday 1940. Called by a telephone call from digging in the garden, he made his way to Grimsby and boarded a trawler which had just limped into the Humber with a live mine lodged in its bows.

The mine was of a type not seen before, a cylinder three feet long and ten inches in diameter. On its top was an external arming mechanism set a “Feuer” (Fire). Shrugging off a powerful temptation simply to turn it to the Safe position, Harrison instead elected for a painstaking operation, carried out with tools scrounged from the trawler. After four hours he was able to get at the fuse itself and make the explosive charge safe. Only at that point he realised that the firing pin of the mine had jammed, and that any attempt to meddle with the arming mechanism would almost certainly have released the pin and detonated the mine.’

‘For conspicuous courage and devotion to duty in circumstances of exceptional danger.’

‘On 12 February 1940, the S.S. Kildare arrived in Immingham Docks with a 250 Kilo German bomb wedged half-through the main deck. Flight Lieutenant Dowland inspected the bomb and realising that the fuse was of a type of which no previous knowledge was available, ordered his men below. Civilian Armament Instructor Harrison, however, remained with him while the bomb was defused and gave valuable assistance.

On 22 March and 7 June 1940, he gave similar assistance in unarming and rendering safe unexploded German bombs and a new type of German depth-charge in ships off Grimsby.

On all three occasions Mr. Harrison displayed conspicuous courage and devotion to duty in circumstances of exceptional danger and difficulty. He has also through his own initiative and private study become an authority on the fuse and exploder systems in German bombs.’

Leonard Henry Harrison was born at Devonport on 6 June 1906 and educated at the local Secondary School, as well as in Lancaster, where his father, an R.N. Recruiting Officer was also posted. Enlisting in the Royal Air Force as an Aircraft Apprentice at R.A.F. Halton in January 1922, he graduated from the base’s School of Technical Training as a Fitter Armourer A.C. 1 in December 1924.

Having then served in Hong Kong and been placed on the Reserve in the rank of Sergeant in 1934, he gained appointment as a Civilian Instructor at the Armament School at R.A.F. Eastchurch. From 1938, however, he served as Senior Civilian Armament Instructor at No. 1 Air Armament School at R.A.F. Manby, Lincolnshire, where he carried out valuable experimental work with fuses, the Ministry of Home Security accepting his findings as the basis for a manual for use in the event of war.

It was just such knowledge that led to his successful part – with Flight Lieutenant John Dowland – in rendering safe the enemy devices described in the above cited recommendation; tragically Dowland was killed while engaged in similar work on Malta a little over a year later. The following extract, taken from ‘English Heroes’, an article by Rose Coombs (This England, Autumn 1981), adds further details in respect of events on 12 February and 22 March 1940:

With Flight Lieutenant J. Dowland and Mr. W. C. Thompson, another civilian instructor, as his assistants, Len Harrison left R.A.F. Manby, calling in at his home to pick up some equipment he thought might be useful. On arrival at Immingham, Harrison and Dowland entered the cabin where they found that the crew had eased their task somewhat by placing mattresses under the bomb to stop it rolling about and to their relief they saw the fuses were uppermost. Mr. Harrison then carried out the procedure he had originally laid down for dealing with fuses. By applying a voltmeter they wore down the electric charge and removed the locking and location rings which rendered the bomb harmless. Mr. Harrison, with the aid of a railway employee, lowered the bomb from the ship over the side and into the awaiting R.A.F. vehicle for transport to Manby. There the component pieces were placed in the explosive stores and as a consequence of the incident courses in Bomb Disposal Training for senior N.C.Os were initiated.

Two of these courses had passed through Manby when on Good Friday that same year another call was received. This time it came from Hull to say that a small fishing boat was in the Humber with an enemy missile on its deck. Mr. Harrison went to Grimsby where he was allocated a rowing boat in which two airmen rowed him out to the vessel. Before despatching the airmen back to the quay he borrowed a pair of woollen gloves from one of them as in his haste to answer the call he omitted to bring the rubber gloves he normally used.

The missile was a dustbin-shaped object which had struck the combing on the port side of the forecastle as it landed and the parachute had carried away leaving the missile jammed against the bulkhead. Inspection proved it to be a type he had not seen before. The fuse was in the upper end of the body and his first thought was that, knowing the German for ‘safe’ and ‘fire’ he could set the pointer to the word ‘blind’ and all would be plain sailing. Several times he considered taking this step but each time instinct held him back. The missile body had been damaged on impact so he therefore decided to extend the fracture in the case and extract the explosive. This he did with tools he found in the boat. The explosive was a greenish powdered material in the shape of cheeses (later identified as hexanite). He removed these lumps carefully and dropped all but one over the side into the sea. The remaining one was taken back to Manby for further examination. The removal of the explosive revealed the fuse and detonating components, which he made safe, then he signalled for his men to row back out to collect him and his ‘treasure’. ’

In May 1941, Harrison was commissioned in the Royal Air Force Volunteer Reserve and took command of the Bomb Disposal School at R.A.F. Melksham, Wiltshire and, later still, at R.A.F. Kirkham. Then in May 1942, he was posted to the Bomb Disposal Branch at the Air Ministry:

‘From then until the end of the war he continued to carry out all manner of bomb disposal work and in fact he was engaged in very dangerous disposal tasks long after then. He went to Belgium and Germany where in 1946 he carried out the delicate job of defusing 700 tons of bombs which had been booby-trapped in a dump not far from Brussels. He and his team rendered them harmless, knowing well that the slightest slip would cause the detonation of the entire cache, resulting in major damage and heavy casualties in the city’ (This England, Autumn 1981, ‘English Heroes’, refers).

In the interim, in 1943, Harrison was party to a ruse devised over lunch with fellow members of the R.A.F. Bomb Disposal Organisation at their Bush House H.Q. in the Strand. The idea was to reassemble the fuses of unexploded bombs, short circuit them and have them smuggled into enemy munitions stores. German bombers would then be blown up by their own bombs. The enemy unfortunately learned of the plan, but thousands of suspicious fuses were scrapped as a result.

Harrison, who had been Head of the R.A.F’s Bomb Disposal Organisation from 1944, was placed on the Retired List as a Wing Commander in December 1949, but he remained employed at the Air Ministry in a civilian capacity until 1970. He retired to Bexleyheath, Kent, was for many years an exemplary Hon. Treasurer of the V.C. & G.C. Association, and died in July 1989, at the age of 83. 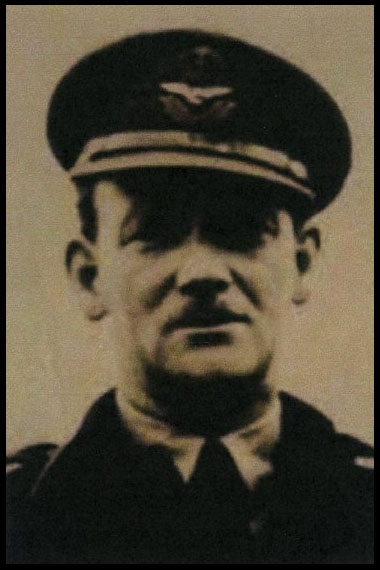